A Different Kind Of Northern Invasion 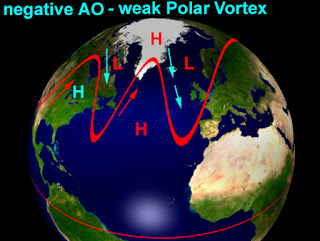 No, I’m not talking about the big rock concert coming in May to Wisconsin, this is something that we all see and feel as we walk out the door in the morning. The record setting cold that has gripped the eastern half of the country since around Christmas has caused the usual ‘hur, hur, where’s you’re global warming now, huh?’ posts on social media like Twitter, including from the Twit-In Chief.

I could go on all day about the difference between weather and climate but sites like RealClimate do a fine job of explaining that but what I want to talk about is how climate change is making cold snaps like this sink even further south and stay longer. Simultaneously warm air from the temperate zone can infiltrate the arctic causing things like rain in Greenland and melting permafrost in Alaska.

One consequence of climate change that is not in doubt is that the arctic is warming over 3 times faster than regions closer to the equator. As this difference becomes less the polar jet stream becomes weaker and allows the arctic air to invade. There are rivers of air in the atmosphere called jet streams that carry weather systems around the planet in a fairly regular linear pattern that keeps them within a certain band of latitude. Recent research from Dr. Jennifer Francis of Rutgers has predicted that these polar invasions will become even more frequent as the world warms.

We had a similar pattern in 2009, I remember one day in January then where the temp in New Orleans was the same as Fairbanks, Alaska. Chaos is the rule of the day in weather now, and with more heat comes more chaos. I have been studying this for over 25 years and observing it even longer, the predictions made by Dr. James Hansen before Congress in 1988 are coming to pass.  Things are moving faster now with bigger disasters becoming more and more common. Also remember that these long lasting bends in the jet stream work the other way as well and we are going to see long lasting heatwaves in summer like Europe in 2017.
Posted by S. cerevisiae at 11:40 AM No comments:

I let this blog go to seed, so to speak but now I am thinking about starting to write again. With the times we are in every voice in the wilderness should chime in.

This is more of a test than anything

Congrats To The Hawks

Well that was a classic Stanley Cup finals and a well-deserved win for the Blackhawks. Boston played hard and matched up well but the Hawks just had more and got some luck in the last two minutes.

Hope to see my Wild hoisting The Cup soon.

Greetings to my readers at the NSA! I've always assumed you were reading all this stuff anyway so this weeks news is no surprise to me. I remember being called an anti-American dirty hippie for speaking out against the so-called Patriot Act a decade ago, now the same ones who passed it are crying foul? The fourth amendment has been gutted over the last thirty years, mostly because of the war on (some) drugs, I don't remember a huge right-wing outcry over that.

But the collapse will render it all moot.

A nice win on an overtime winner by the rookie Zucker - GO WILD!

Because It's The Cup

What a game last night! Unfortunately the Wild came up short in overtime but they hit a couple of posts and could have won with a little luck. That is how you play for the Stanley Cup, all effort, all the time. Great job by Harding in goal and the whole team.

ETA: I shaved yesterday morning so I think I'll grow a playoff beard, Hope to look like these guys when the Wild drink from the Cup.

Look at the little widget on the right side of the page, it measures atmospheric carbon dioxide at Mauna Loa in Hawaii where they have been monitoring the level continuously since the 1950's. It is now poised to go over 400 parts per million(ppm), a level not seen on earth in three million years. This should be front page news but because of the well funded merchants of doubt the general public still think there is a debate among scientists about what is the major forcing that is driving climate change.

CO2 is a greenhouse gas. That is simple physics and can be demonstrated by a smart sixth-grader. We have now gone from about 250ppm to 400 in only a hundred and fifty years, but some still think this has no affect on global temperatures. I've got some news for you deniers - nothing else fits the already observed warming EXCEPT forcing by carbon dioxide. If you can prove otherwise I'd love to see it because believe it or not - I WANT TO BE WRONG! I would love nothing better than to see some peer-reviewed science showing that we are not totally screwed as a civilization but right now the vast majority of papers I see point to ecological disaster right around the corner.

Shit, might as well drink a toast. To humanity! We had a good run but we are still just apes with guns.

I call myself S. cerevisiae because I enjoy good beer and because the more I observe the depletion of planetary resources by humans I tend to agree that as a species we are not proving to be smarter than yeast. This is my little corner of the blogosphere where I will rant about whatever I need to vent about, from the sorry-assed Minnesota Vikings to the even sorrier-assed (is that a word?-who cares) politicians who fiddle as the planet burns.